*This article first appeared in the U.S. Air Force Leader 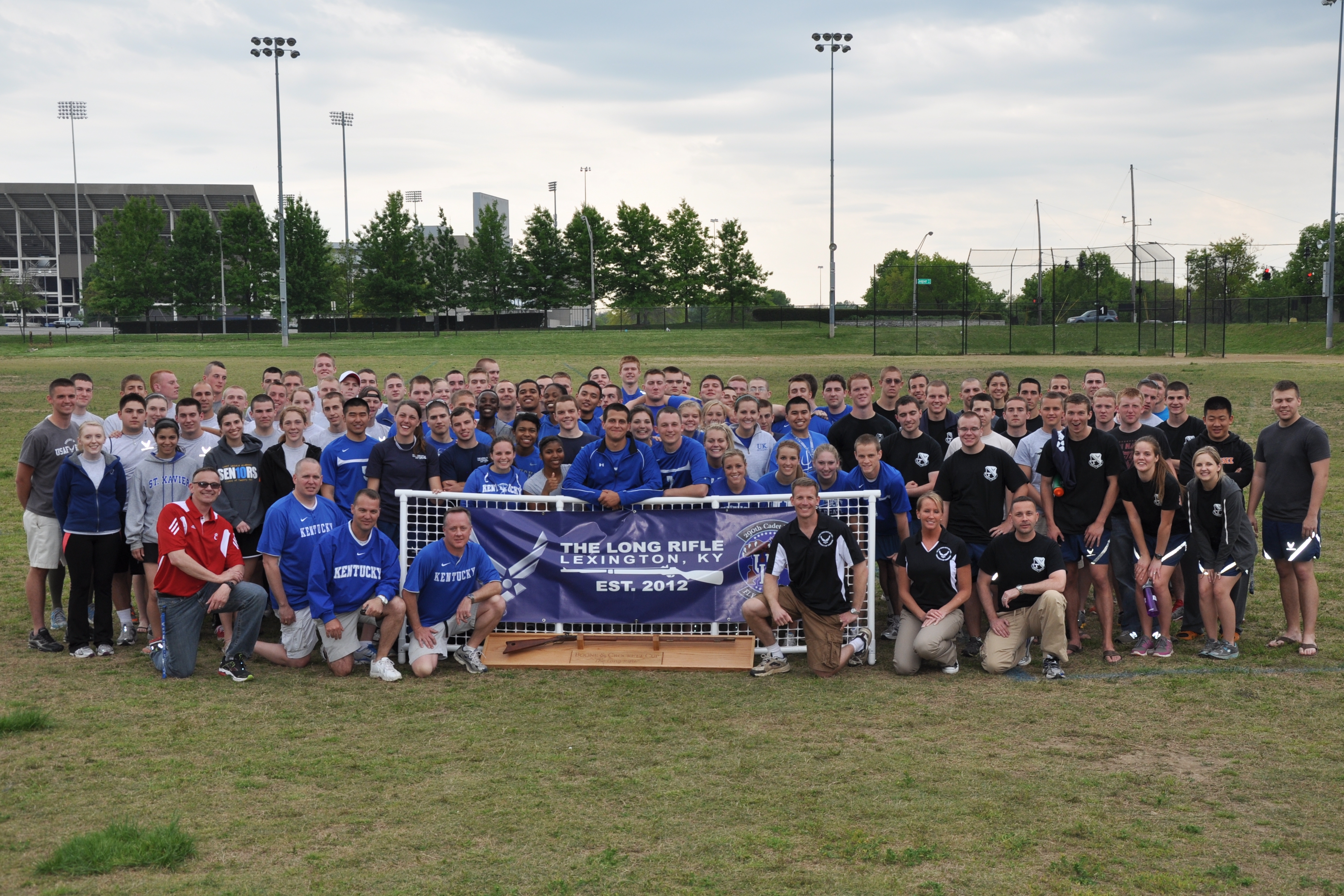 The morning was cloudy but bright, ominous of the fight that lay ahead, as young men and women from the detachments of the University of Kentucky, University of Cincinnati and University of Tennessee stepped onto the fields of Lexington, Ky. Cleats, gloves and jerseys were garnered as each individual began to prepare for the events to come.

At 8:00 a.m. on April 14, cadets from the Universities of Kentucky, Cincinnati and Tennessee formed up on the fields for the colors to be presented and the National Anthem to be sung, officially signaling the start of the first annual Boone and Crockett Cup: "The Long Rifle" field day competition.

The tournament was hosted by Detachment 290, University of Kentucky, and created by the efforts of its Special Projects Flight Commander, Cadet Andrew Kerr.

Kerr began coordinating months in advance to secure all of the locations and planned all of the details so the tournament could run as smoothly as possible.

The tournament's name was created for the states in which the schools that would originally be participating in the tournament are located. Daniel Boone, explorer and settler of the Commonwealth of Kentucky, and Davy Crockett, famed frontiersman and native of Tennessee, represented the two states. However, it was later decided that the tournament's participants should expand past these two states.

"We added the 'Long Rifle' to the name so we could have the opportunity to add more schools from more states," said Kerr. "This will be great in the future because we want the tournament to keep improving and expanding every year."

The tournament was comprised of many different events, including a 5K run, calisthenics, soccer, football, basketball, ultimate frisbee, tug-of-war and dodgeball. Each team was required to bring a minimum of 30 cadets to participate.

Each event was played with intensity but with a sense of solidarity as well, displayed by all of the cadets from every team. Major Rusty Mardis of the University of Cincinnati, Detachment 665, commented on the good-natured spirit of the tournament.

"I think there is some good competition and they're fighting hard ... two people just ran into each other and they helped each other up and apologized and that's really what it's all about," said Major Mardis.

Lieutenant Colonel Brian Delamater, Detachment 800, University of Tennessee detachment commander, agreed that the cadets had the right mindset about the games. "Everybody is trying really hard and fighting their battles but everybody is getting the opportunity to kind of mix and mingle and talk and relax and hangout," he said. "That's half of it. I've been in some other competitions where it's all about the competition and you don't see the camaraderie side as well.

As the day pressed on, the competition heated up and the passion of the players was evident. However, even as they played, the purpose of the games was not lost.

"Well, in the big scheme of things it translates very well to active duty, because everything we do is all about a team," said Major Jesse Hedge, University of Kentucky. Also, as an officer, it's kind of competitive to be the best at what you do...so just the tie-in of teamwork and competition matches up very well. In home station situations, you have other units you compete with informally, but then when you deploy you're all on the same team."

When the battles had been fought and the games were over, the teams formed back up on the fields for the presentation of "The Long Rifle" trophy.

"I see a lot of dirt on shirts and a lot of tired faces, but a lot of pride as well," said Franklin. "The tensions were high sometimes, as it should be, but at the end of the day, just like you are right now, you're all on the same Air Force team. You're all going to get the same Air Force commission. You're all going to be out fighting the good fight. Not on this field but somewhere else, so keep that in mind. That's what this is all about. We had a great time hosting. We're looking forward to doing this again. The showing was great, the support was great."

After Franklin finished his speech, the cadets fell out of formation and gathered around the banner and "The Long Rifle" trophy for a final group picture. The smiles and laughs from the group signified a long but successful day of competition and camaraderie. As they packed up and headed to their cars for the ride home to their respective detachments, they parted with "see ya'll next year" and promises of even more exciting competitions to come.