Taking On The Big Uglies - 2.6 million grant to study African American female drug use and the effects of the criminal justice system

A wave of current research at the University of Kentucky deals with the "Kentucky Uglies.”  That's the term UK President Lee T. Todd Jr. designated to the state's long-entrenched problems that include poverty, poor health care and illiteracy.

Sociology professor Carrie Oser has been awarded a five year, $2.6 million grant from the National Institute on Drug Abuse (NIDA) for her research project entitled “African American Female Drug Users: HIV, Health Disparities, and Criminality,” – a study that she fully acknowledges will be taking on several “Kentucky Uglies” at once. 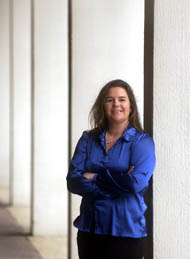 Oser’s overall goal is to understand how drug use and criminality are related to health disparities, particularly HIV.

The significance of this study is its potential to provide data about criminal justice systems that is relevant to health planning. Oser's research will also examine health policy for prevention, intervention, and treatment of African American female drug users.

Oser and her colleagues will be publishing and presenting their findings at conferences, but Oser hopes they will be working closely with governmental agencies as well. She plans to distribute reports to the Kentucky Department of Corrections that outline what types of services African American women receive in different segments of the criminal justice system.

“This information can help them see where they might need to devote more or less resources – depending on what we find,” Oser said. “I think the Kentucky Department of Corrections has done amazing things by putting more resources for addiction treatment. I really haven’t fully explored the health services aspect, I’ve only looked at the drug treatment aspect – so this is also a new area and new horizon to examine.”

The study will recruit 800 women in Kentucky, mainly in the Lexington and Louisville areas – Of the 400 drug users and 400 non-drug users included in the study, 200 will be women in prison, 200 in jail, 200 on probation and 200 in the community. The focus will be on changes in the women's health status and their use of health services over an 18-month period.

“One thing in particular that I’m interested in looking into are changes in health status with women before they enter prison, when they’re in prison, and when they get out into the community,” Oser commented. “They may have better health care in the institution than they do in the community.”

Socio-cultural interests also drew Oser to her project. On her mind is the question of what issues in the African American community will the study possibly expose? Oser wonders if her research will reveal “the women feel they’ve been discriminated against or if they have fears of medical professionals – or how they feel that cultural factors impact their health status and use of health services.”

Oser pointed out that many times within the African American community people get HIV testing, but don’t come back for the results. In her study they’ll be doing onsite rapid testing – where the results are known in 20 minutes. It’s a method that the Center for Disease Control and Prevention recommends medical professionals and researchers use.

Another cultural issue that also intrigues Oser is the fact that “African American women are the least likely to date outside their race, but they are also facing this concept of an unequal sex ratio.”

Oser mentioned that African American men have a higher premature mortality rate than White males and are also more likely to be incarcerated. “So, when African American women aren’t dating outside their race and they have fewer potential partners – this concept called the “Male Marriageable Pool Index” comes into play, which looks at the number of eligible employed women versus men. With the unequal sex ratio and unbalanced power, women may be more willing to engage in high risk behaviors to keep a man because they want to fulfill their emotional and/or financial needs.” Oser cited not using a condom or having unprotected sex with multiple partners as risks that can relate to the transmission of HIV.

“Those are things that I plan to look at, in addition to, how much do African American women underestimate their risk of contracting HIV? For example, African American men are more likely to self-identify as heterosexual than other men who have sex with men. In addition, African American men may have engaged in unprotected sexual behaviors with another man while incarcerated, but then they identify as heterosexual when they re-enter the community. This could place their female sexual partners at greater risk for contracting HIV.”

Oser’s socio-cultural interests on the topic seems to be endless as she also mentioned “conspiracy theories that AIDS was planted in the African American community.” It’s a curiosity and willingness dedicated to tackling one "Kentucky Ugly," or multiple "Kentucky Uglies" at a time.