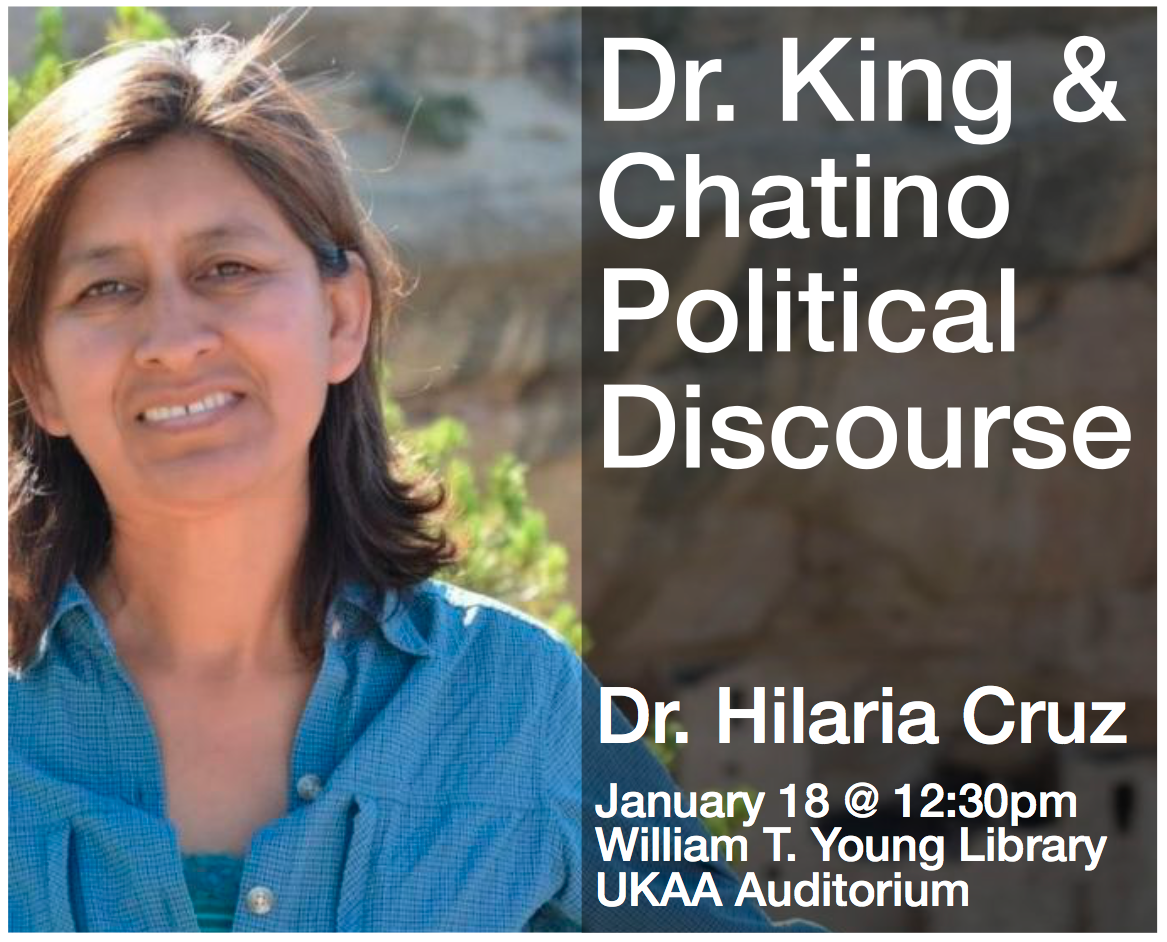 In March 1965, after the bloody march from Selma to Montgomery, Alabama, the Rev. Dr. Martin Luther King, Jr. delivered a sermon entitled, "Our God is Marching On!" This is political discourse trying to affect change in racial understanding towards greater equality while using religious themes and oratorical styles found in the pulpit. In this lecture by Dr. Hilaria Cruz, there will be comparisons on theme, repetition and parallelism to the political discourse found in San Juan Quiahije, Oaxaca, Mexico. Here in this remote place another racial minority to the greater Mexican society strives for equality using religion in political discourse.

An event in honor of Dr Martin Luther King, Jr. sponsored by the UK Department of Linguistics

Seminar Series: "Notes on the Language of the Cambodia Chinese Diaspora"

There has been a Chinese population in Cambodia for more than 500 years and contact with Cambodia was first mentioned by the eminent China emissary Zhou Daguan as early as 1296 during his travels there. Despite a relatively high degree of integration into to the majority Cambodia culture, ethnic Chinese have maintained their own social organizations, news media, and schools.  The Cambodian Chinese population is organized around five Huiguan (会馆) ‘congregations’  corresponding to the southern-origin Chinese groups that comprise it: Chaozhou 潮州会馆,  Cantonese 广肇会馆，Hakka 客属会馆, Fujian 福建会馆, and Hainan 海南会馆.  Until the Khmer Rouge forced closure of Chinese schools in the mid seventies, the language of Chinese education followed the dialects of each association.  However, in recent times Mandarin has become the lingua franca of the Sino-Cambodia community, though among ethnic Chinese there are few if any native speakers of Mandarin.

Through examination of survey data and recorded interviews, this presentation sketches a picture of the contemporary Chinese community in Cambodian and outlines some of the language change occurring by contact with the majority Khmer langauge. The paper gives special attention to examples from the local Cantonese.

Professors Go Primal: A public lecture by the creators of the languages for Far Cry: Primal

This Wednesday, Andrew and Brenna Byrd will explain in detail their incredible journey back in time with Ubisoft's game "Far Cry: Primal." They will describe the process of creating two entire languages based off of Indo-European, how they trained the actors and worked with the directors and writers off and on set, and what they hope this exposure means for the field of historical linguistics. Additionally, there will be a short lesson in Wenja (the main language of the game), a scene reenactment with two talented theater students to show the filming process, and two copies of the game to raffle off to attendees.