Katherine Rogers-Carpenter grew up in Louisville, Kentucky.  She worked for several years as a graphic designer at an international printing company in Boston, Massachusetts, and in 1999 she earned an M.A. in English from Harvard Extension School. After returning to her native state, she completed a Ph.D. in English at the University of Kentucky and became an associate professor there in 2021.  Dr. Rogers-Carpenter’s research interests include feminism, labor, and medical humanities.  Her scholarly work has appeared in Women’s Studies and Rethinking Marxism.  One of her creative works, Iota Mae and the Giant Head, was produced by Squallis, a local experimental puppet troupe.  Dr. Rogers-Carpenter is an avid gardener, cook, dancer, and dog walker.  She lives in Louisville with her husband. 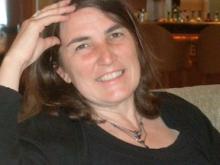